“la classe” 2015
A BRIDGE BETWEEN CULTURES

FUTURE EVERYONE, Aicha Baakili and Daniel Eisenhut have the great pleasure and honour to invite you to our inaugural exhibition of our project “la classe” 2015 a collection of portraits depicting Syrian and Swiss children.

At FUTURE EVERYONE we strongly believe that all kids worldwide, deserve the same care, opportunities and prospects in life. Our exhibition aims at showing that there are no differences between humans and that there are no human borders, but that these are the state borders that separate us and have us live such different lives.

Philanthropist Aicha Baakili and artist Daniel Eisenhut enabled the project “la classe”.
She is a Berber Arab, committed to helping deprived children in underprivileged regions.
He is a Jewish Israeli painter of East European origins, with a family history of forceful deportations and immigration.
These two people with different origins, history and faith, have one thing in common: the love of art and of human beings, which motivated them to create the project “la classe” and this extraordinary exhibition.

We look forward to seeing you there,
Aicha & Daniel
FUTURE EVERYONE
la classe
https://futureveryone.org/
http://danieleisenhut.com/home/

future everyone and “la classe” are both not funded. I’m sponsoring and supporting the two projects on my own.
while the opening, Original copies of the portraits will be sold for a minimum price, 100% of the fund is going to be donated to the Syrian children and their families directly involved with the project “la classe”, in a form of medical and education support. 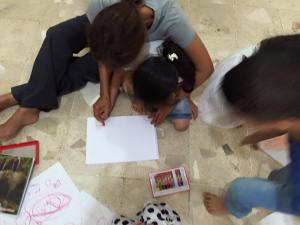 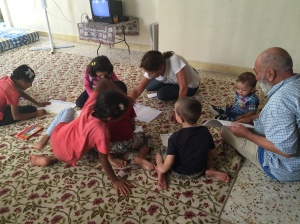